You have no items in your shopping cart.

Hands-On With the Vivant Dabox Wax Vaporizer By Leafly

Posted in Blog By Vivant USA

The Leafly office recently got a chance to take Vivant’s new Dabox concentrate vaporizer for a spin. We put this wax vape in the hands of product guru Darren Harris and dab virgin Ian Chant, then had the two of them compare notes. Here’s what they had to say after a week with Vivant’s newest offering. 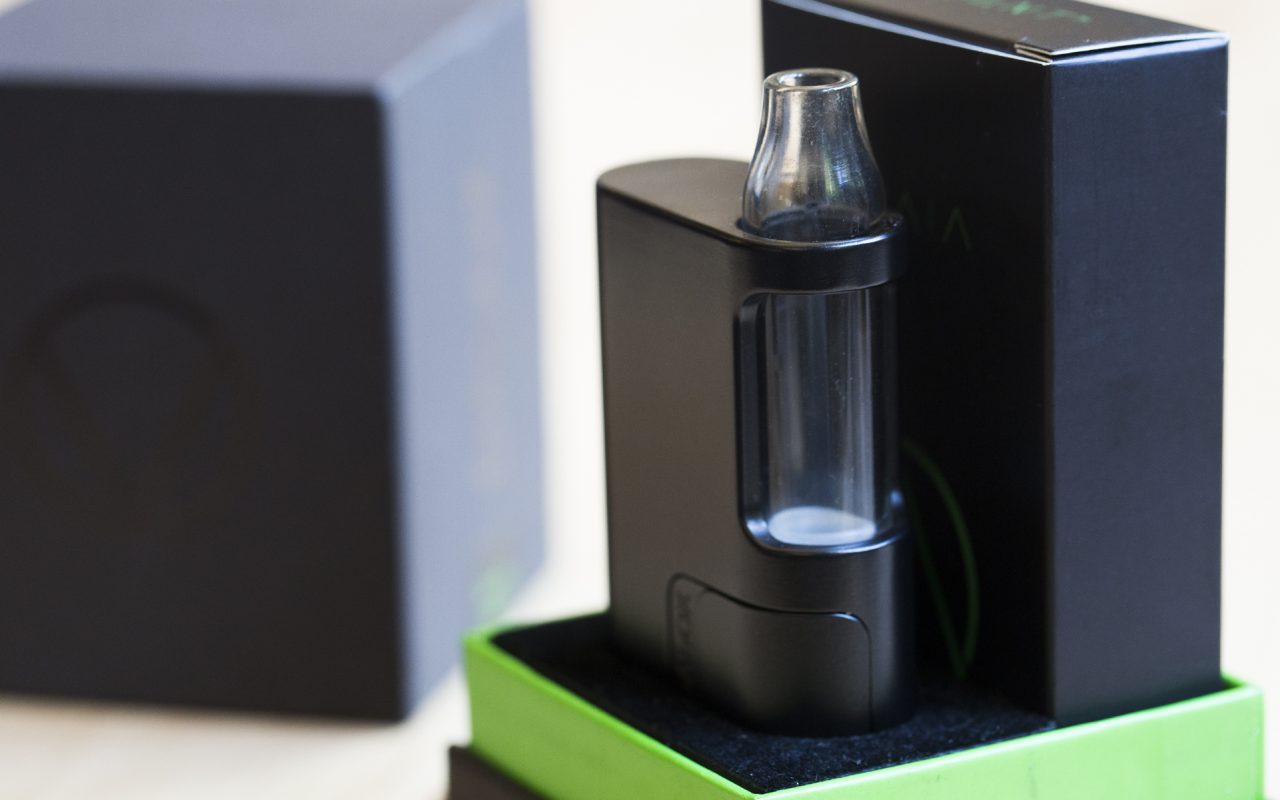 DH: So I use a standard dab rig pretty regularly, and I enjoyed using the Dabox. I’m used to pulling as much as I can, and so the first few times, I held it down for a nice long time. I realized later that you don’t really have to hold the heating button down for more than five seconds or so to get a perfectly good pull off this and blow out a cloud that was pretty massive.

IC: It’s probably more reflective of how new I am at this, but it took me a couple of times putting it through its paces for me to be comfortable and feel like I knew what I was doing. But once I had a handle on it, the Dabox did really right by me.

DH: It’s kind of odd that there’s a learning curve, because functionally, it’s very simple—it’s one button, no temperature changes, you just hold and inhale. The thing you need to figure out about that is how long do you need to hold the button. For me, it took a day or two to learn that I could really just hold it for a second or two and kind of sip off of this. Because if you want to get super-smacked, you can just rip this thing two or three times and you’ll be right there. But if you want to work your way up to that level of high, you have to kind of learn to finesse it.

IC: Design-wise, I really liked the Dabox too. It fits right in the palm of your hand, and it’s got a nice heft to it that I wasn’t necessarily expecting. It feels really good when you’re holding it. The heating coil was easy to swap out, and the swing-open chamber was really smooth. Taken as a whole, it just feels really well-crafted.

DH: Yeah, I’ve used a number of concentrate vaporizers that feel cheap, whether it’s a plastic mouthpiece or the actual construction. This does not feel like something you’d expect to find at this price point. 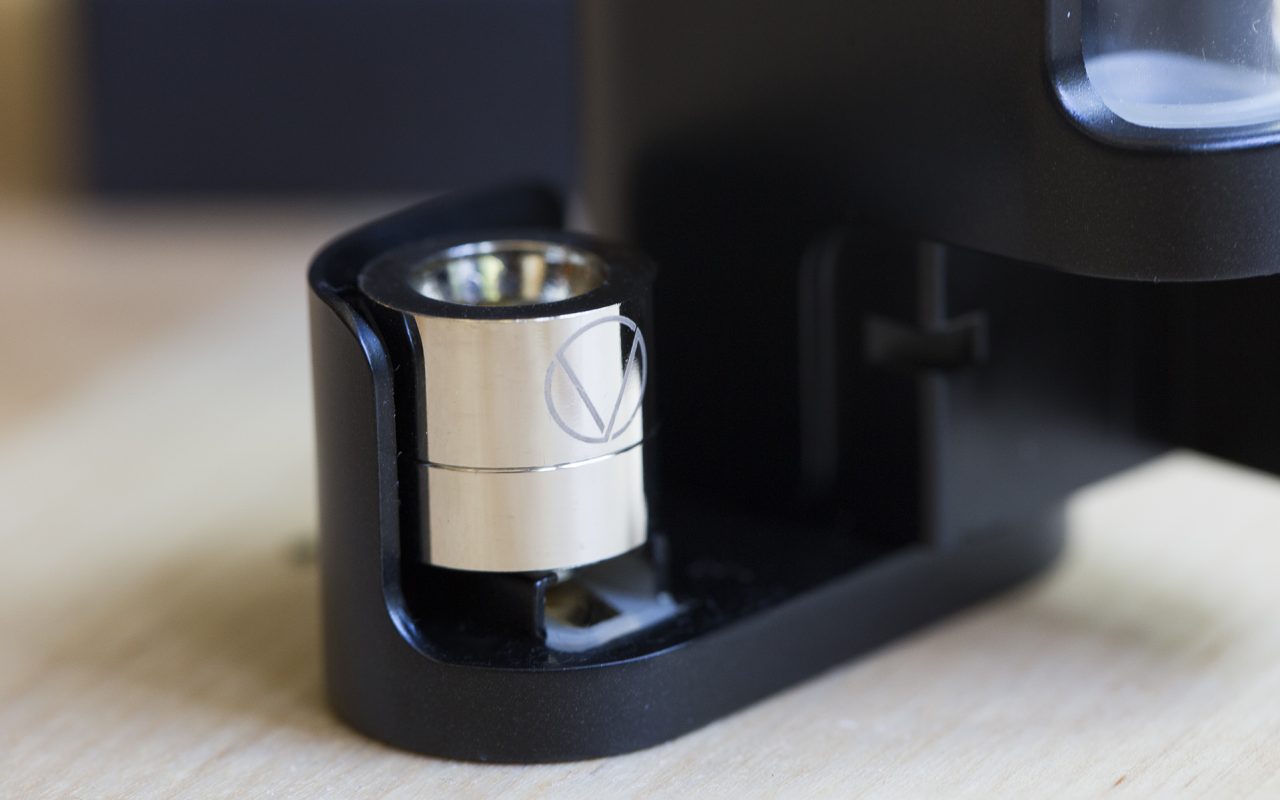 The chamber of the Dabox swings out for easy loading and coil replacement. (Julia Sumpter for Leafly) Just Add Wax

IC: So what concentrate were you using with this?

IC: I was using an Oleum sugar resin as well, which was really kind and very easy to load. I’m not sure would want to go with anything that was much viscous than that.

DH: Yeah, loading honey crystal into the Dabox, which has kind of a shallow chamber, was tough; sugar resin was a lot easier to break off and drop in. I’d definitely recommend a more solid concentrate like sugar resin or shatter that you can break apart easily over a more viscous product, which is going to be more time consuming and involve some extra cleanup.

IC: As far as portability, I would be super happy to take a Dabox to a friend’s house for a barbecue or for a hike in the woods. But because you are going to regularly be loading wax into the chamber, I would feel on the conspicuous side using this vaporizer at, say, a concert or a park.

DH: Yeah. I think that this won’t be my main go to piece for dabs, but if I’m going to a friend’s place or going to be on the road for a weekend, it makes a perfect side accessory to get that experience on the go. And that’s one place I’d give this an edge over even some things that bill themselves as portable dab rigs, which still have things like an e-nail that are gonna get you some looks.

IC: This is definitely pretty anonymous. I felt like once this is loaded, I could walk around downtown Seattle without anyone giving me a look.

DH: Well, that’s exactly what I did, so yeah, you can. 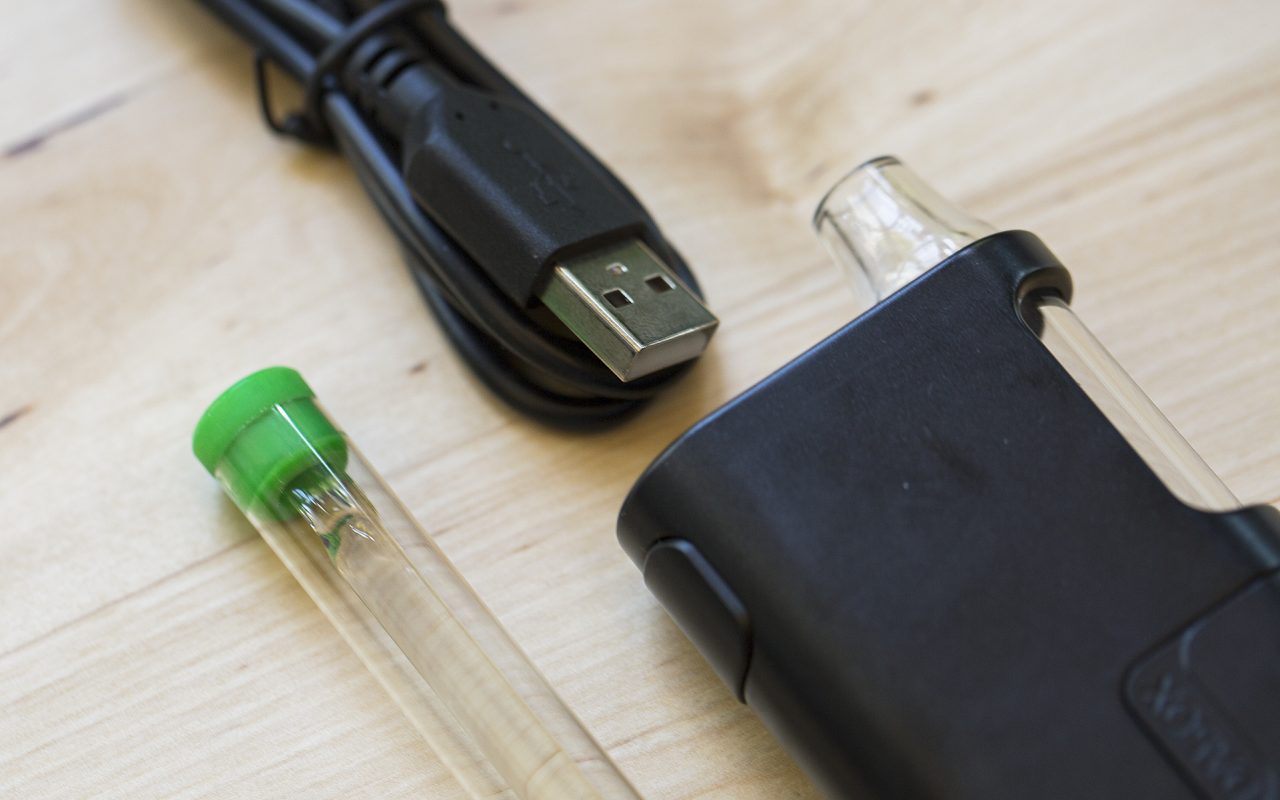 An included scoop and charger make sure the Dabox is ready to go right out of the box. (Julia Sumpter for Leafly)

IC: As someone who is new to using concentrates, and especially to a concentrate vaporizer, I feel like I could have done with some more documentation. For something that bills itself as easy to customize by swapping out coil heads, I would love to have seen that explained out just a little more.

DH: I agree. I would have liked a little bit of a warning on that front and some pointers on how to easily clean stuff.

IC: Even as someone who’s generally disinclined to read instructions, I read these thoroughly and I still had some questions. And as we talked about, most of that stuff I figured out just through use, but I think they could have eliminated some of that trial and error period.

DH: Something I did find annoying was the silicon filter, which got clogged a lot.

IC: Yeah, I was taking a toothpick to mine pretty regularly.

(Turns out, there’s an instruction manual available online that was more thorough than the one that came packaged with the Dabox we tested.)

DH: I was curious, since you’re new to this experience, did it make you more likely to use a vape in the future, either for concentrate or for flower?

IC: Yeah, this thing definitely piqued my curiosity on vaping, and also on concentrates. I’ve been curious about things like sugar resin and shatter since I moved back to Washington, but I think any process where two of your main tools are a torch and a nail… you’re going to scare some people off, me included. The Dabox, though, is pretty simple and feels familiar.

DH: I think this is a great entry point device. I have friends who are curious about dabbing, but often I end up kind of doing everything for them—it’s an intimidating process. If you’re interested in dabbing but you’re not quite sure where to start, the Dabox is a great way to affordably give yourself a dab experience before you jump in entirely.

Products on this site are intended for sale to adults 21+ years only. If you are not legally able to purchase products in the state where you live, please do not enter. Thank you!